The bizarre link between beetroot and Brexit

Let’s not beet about the bush. You’ll have noticed one particular veg cropping up consistently in your boxes over the past few months (and we’re not talking about potatoes…) 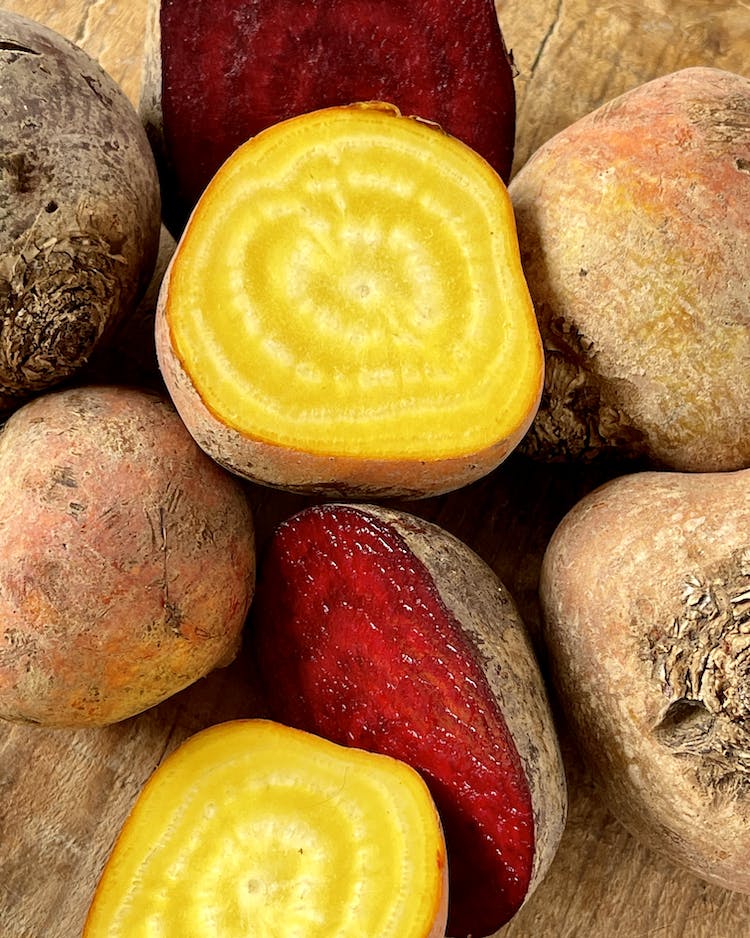 Brightly coloured and richly flavoured, beetroot is hands-down one of the most attractive vegetables out there. To work out why there’s been such a glut of this vibrant root veg recently, we had a chat with our grower, Iain, whose family has been growing beets in Bedfordshire for several generations.

While it may be a foe of kitchen countertops across the nation, beetroot is also undeniably lovely to look at and has a fantastic earthiness that makes it a star ingredient in all sorts of dishes.

Nevertheless, it’s no secret that beetroot is widely considered the Marmite of the veg world. Whether you love it or hate it though, one thing is for sure: it’s a veg that’s been in serious need of rescuing in recent years.

We’ve been taking beets off Iain’s hands for a long while now - and that’s not likely to stop anytime soon. But why are there so many beets? Iain suspects there’s two major reasons behind this: the COVID-19 pandemic and Brexit.

Back in his grandfather’s days, most of the beets grown on the farm went straight from the fields to local greengrocers where they would be thrown into vats of hot water and sold ready-boiled.

With the days of neighbourhood veg shops long gone, new homes have had to be found for this veg. Today, one of Iain’s biggest markets for beetroot - especially those attractive golden yellow and candy Chioggia varieties - is the catering industry. “Restaurants like a bit of colour on their plates,” he explains.

But with restaurants and hotels closing their doors for most of the COVID-19 pandemic, there was, somewhat unsurprisingly, a steep drop in orders. Why not sell them to supermarkets, we hear you say? That, sadly, comes down to beetroot’s declining popularity.

Despite beetroot’s many lauded health benefits - from lowering blood pressure to supporting digestion - it’s not a typical part of the UK’s diet. In fact, it’s more commonly eaten in almost every other European country.

From borscht (a soup made with red beets) to red chrain (a spicy horseradish-based sauce), numerous staple dishes in places like Poland, Romania, Lithuania and Ukraine feature beetroot as a key ingredient.

According to statistics from the ONS, hundreds of thousands of EU nationals have left the UK since the EU referendum ruled in favour of Brexit in 2016. What’s more, COVID-19 saw another one million Europeans leaving for their home countries in 2020 and 2021. So, what has this meant for the humble beetroot?

Iain suspects this exodus of people may have contributed to his excess of this particular veg: “Lots of Eastern Europeans have gone home because of Brexit and the pandemic, so there’s less demand for beetroot.”

With fewer people buying it in the shops and restaurants still recovering from the pandemic, there’s now a mountain of beetroot being left to rot. It’s not just Iain that’s been impacted, either. Even growers who sell their beetroot abroad are facing cancelled orders due to issues such as haulier shortages and lengthy paperwork.

Another thing that can make it or break it with beetroot is how well it’s stored. After being plucked from the fields, these colourful roots are typically packed away at cool temperatures to keep them fresh for as long as possible.

Exactly how long beets can last before they need to be sold is often tricky to predict. “Sometimes, they can suddenly break down,” says Iain. “This year, though, they’ve been holding up well.”

That’s great news for our community. We’ve already rescued a tonne of Bedfordshire beets for your boxes and will continue to do so until Iain’s stocks run dry. He’s expecting the season to last a few more weeks too, giving you time to try out some new recipes. You’ll find plenty of options to tempt your taste buds on our website. Why not whip up a bowl of Roasted Beetroot Soup or use your beets as a delicious filling for gyoza?