If you’ve received a box in the last few weeks, you’ll already know about our Odd Five Ways campaign. As well as inspiring you with some truly mouth-watering cooking techniques, we’ll also be treating one lucky Oddboxer to an exciting prize… 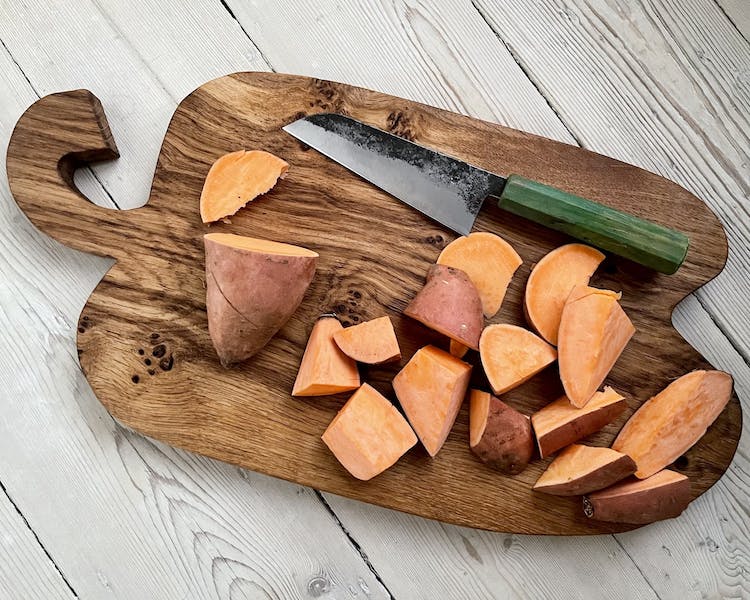 You’ll unearth more details about how to enter at the bottom of this page. For now, though, let's take a closer look at one of the two amazing items in the prize draw. Namely, a beautiful hardwood chopping board that comes courtesy of Saunders Seasonings.

The award-winning London-based timber company was founded around five years ago by furniture maker, Bruce Saunders, after spotting a gap in the market for more English hardwoods. We had a chat with Bruce’s partner, Patrick, about the company’s roots and mission to rescue the capital’s unwanted trees.

A seedling of an idea

Most of you already rescue dozens of fruit and vegetables every month that might otherwise go to waste. But have you ever thought about rescuing trees from being chipped and burned?

We’re not talking about trees that have been commercially grown. Instead, we mean those old, dying and sometimes diseased trees that so often have to be removed from parks, streets and other urban spaces for public safety reasons.

It’s these unwanted trees that are Saunders Seasonings sweet spot. Bruce recognised a need for traditional, local hardwoods, so he began sourcing these urban trees more than five years ago and giving them a new lease of life.

One of the first trees Saunders Seasonings rescued was a London plane tree from a construction site in Camden. Realising the wood was of good enough quality, Bruce took the stem of the tree, let it dry out for a year, seasoned it and then turned it into slabs and boards for furniture building.

Fast forward to today and Saunders Seasonings currently rescues around 200 trees a year.

Most are donated by local councils; the only costs involved are the felling, drying and seasoning. “Our aim is to see a change in how trees are rescued,” explains Patrick.

While not every tree can be taken (some are too diseased), the ones that can are typically given a second life as furniture, whether that’s bespoke pieces crafted in-house or items made by other companies around the UK.

From felling to furnishings

Patrick suggests that their customers really value the idea of having something made from a rescued tree. “There’s this commonality with Oddbox, too,” he says. “We have also innovated to use previously ignored materials.”

In the future, Saunders Seasonings hopes to expand the furniture side of the business and even bring out specific ranges that can be adapted to suit your needs and personal preferences. In other words, they’re definitely a business to have on your radar.

The hard-wood chopping board in our Odd Five Ways prize draw has been crafted from a 300-year-old oak tree removed from a street in Barnet. After a year of drying out, it’s now been seasoned and used for all sorts of projects - including functional kitchenware.

A work of art made entirely out of materials that would otherwise go to waste, it’s the perfect match for our other prize: a zero-waste Clement Knives kitchen knife handcrafted entirely out of recycled plastic and metal canisters.