Our visit to one of our suppliers

A few weeks ago (long before COVID-19 reared its head!), some of our team took to the roads and headed up to the county of Lincolnshire to pay a visit to one of our suppliers. These particular suppliers are both a packhouse and a grower, with supermarkets being their main customer. Lucky for us they have plenty of surplus and odd veg we can get our hands on! 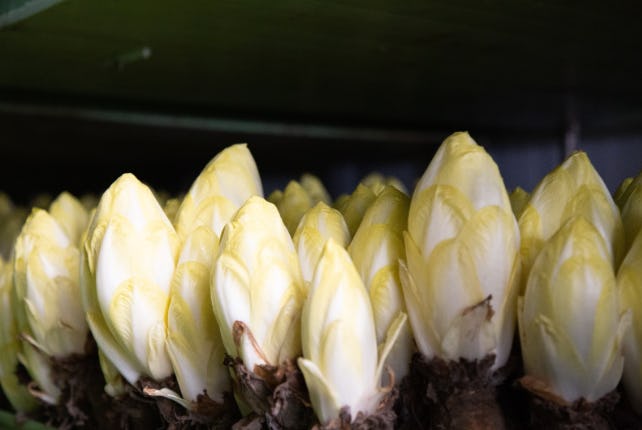 We visited their brand new facilities and were shown how veggies get from the soil all the way to your very own fridge. With this being the first time many of us had ever visited a farm or supplier, the day was full of ‘ooohs’ and ‘ahhhs’ as we admired the technology and sparkling new packhouse.

This supplier is the only UK commercial grower of chicory, and later on in the day we got to check out their mysterious chicory growing rooms… think Harry Potter’s prophecy orbs in the Department of Mysteries. Who knew chicory was grown vertically? Who knew it was grown in the dark? And who knew that it wasn’t grown in the field? We certainly didn’t, but we had the privilege of being shown around. The chicon (the chicory bud) takes 21 days to grow before it can be harvested. This is all done in a hydroponic system which uses a water based system and no soil (don’t worry we didn’t know what that meant either). Stacked right up to the ceiling, the chicons were happily growing like a sea of flower buds opening up.

In the afternoon we visited one of our farms, who have a constant year round supply of celeriac. Behind huge sliding doors are mounds upon mounds of celeriac where they lie dormant until it’s their time to jump in a giant celeriac bubble bath. The enormous new machinery takes the celeriac through vigorous different stages, cleaning them up so they can be ready for collection. Like us here at ODDBOX, these farmers take their environmental and social responsibilities seriously and their new water recycling system is seriously impressive! Once the celeriac has been washed, the water gets taken into large tanks where a separation process begins to take the soil out of the used water and filter the water. Once the process is complete, the soil is taken back to the farm and the water can begin to wash the new celeriac all over again!

So a fully circular process with amazingly efficient use of resources, just the sort that we love here at ODDBOX!