The sustainability movement has made some remarkable progress in the last couple of years. ‘Single-use’ was named word of the year in 2018 by Collins Dictionary and online searches for ‘plastic recycling’ increased by 55% last year. Plant-based alternatives can be found at any UK retailer.  Yet, it seems that many of us are still unaware of one of the biggest issues facing the environment today. With that in mind, we at Oddbox would like to shed light on what is an often overlooked matter within the sustainability discourse and its environmental implications - food waste. 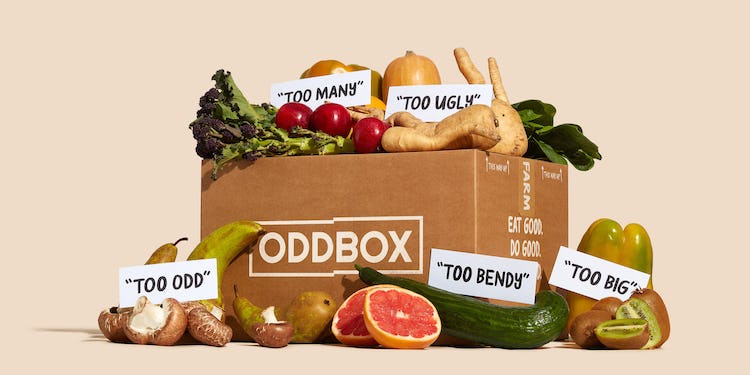 HOW MUCH FOOD IS WASTED?

It is estimated that approximately one-third of all food produced in the world is lost or wasted . It seems impossible, however, another hard hitting fact tells us that each year more than half of all the fruits and vegetables produced globally are lost or wasted.

To put this all into perspective, we could prevent the billion people in the world that go hungry on less than a quarter of the food wasted in Europe, the UK and the US alone.

All these numbers can be hard to visualise, so here is for comparison: the perfectly edible food and drink we wasted in 2015 would have filled 9 Wembley Stadiums or 4000 Olympic sized swimming pools.

SO WHY DOES ALL THIS FOOD GO TO WASTE?

Food goes to waste at many different stages of its cycle. In the home, for example, it can come down to over-buying, expiry dates, storage or simply (lack of) meal planning. In primary production or farm level, reasons include weather damage, overproduction, reduced orders and cosmetic requirements .

A major challenge for farmers is to match supply and demand. Customers’ orders aren’t easy to predict and this fluctuation often means growers find themselves with too much or too little of a certain crop without a home.

Adding to that, in Britain we struggle to predict the erratic fluctuations in the weather. This impacts tremendously farmers and their harvests. For example a cold start to the season for strawberry growers could affect pollination, leading to a higher proportion of misshapen strawberries later on.

Speaking of which, another cause of food waste comes down to cosmetic standards whereby fruit and veg must meet the right shape and/or size specifications. This is frustrating for growers as often their produce is edible and good quality, simply too small or large to be sold into the intended market.

Lack of awareness surrounding the issue of food waste is an issue in itself. Our friends at Too Good To Go revealed that less than a third (31%) of Brits are aware that wasting food contributes to climate change, making it difficult to adopt strategies to mitigate the effects of food waste, such as composting.

WHAT ARE THE EFFECTS OF FOOD WASTE?

The negative effects of food waste on the environment are often overlooked compared to other industries. However, the yearly carbon footprint of the food wasted by Scottish households was nearly three times that of plastic waste. Eliminating global food waste would save 4.4 million tonnes of Co2 a year, the equivalent of taking 1 in 4 cars off the road.

Food waste alone generates about 8% of global greenhouse gas emissions. This happens as large amounts of methane is produced when food waste ends up in landfill sites and cannot decompose. If food waste were a country, it would be the third largest emitter of greenhouse gases, surpassed only by the United States and China.

As well as releasing methane, the overproduction of food uses up precious water supplies. 1.6 billion tonnes of food is wasted every year worldwide and that food waste drinks enough water to fill Lake Geneva three times.

SO, HOW IS ODDBOX HELPING REDUCE FOOD WASTE?

Oddbox exists to fight food waste. At Oddbox we work with growers across the UK to rescue fruit and veg at risk of going to landfill. We never dictate what should be grown by our growers. When farmers have too much produce or it does not meet retailers cosmetic specs, we help them by taking it off their hands and finding mindful homes for it. We want to inspire people to eat sustainably, through rescued seasonal veg, that is carbon-positive for our planet.

Doing good can be easy. Subscribing to a weekly medium fruit & veg Oddbox would mean saving 84kg of food, 317kg of CO2 and 69076 litres of water from going to waste in a year.