If you’ve opened a newspaper in the last few weeks, you’ll have found that Covid is rivalled in the headlines by another big C-word: COP26. The 26th UN Climate Change Conference of the Parties will bring together around 200 countries in Glasgow, to put the climate crisis in the spotlight – more specifically, to examine the progress and commitments being made by world leaders to slow our rapid progress towards 1.5 degrees warming. 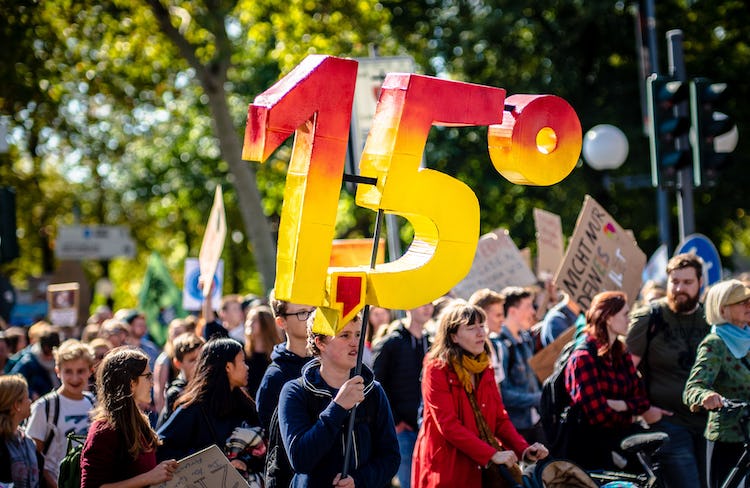 In the lead up to this year’s event, many have pointed out a gaping hole in the action plans being shared by governments: food. The food system, including food waste, has been sidelined in favour of other areas of focus – despite its huge and well-established impact on the environment. Feedback, an organisation that campaigns for a sustainable and just food system, is one of them – their Stop Feeding Climate Change campaign is calling on the UK government to take action to cut food waste and greenhouse gas emissions from food.

We spoke to Martin Bowman, Feedback’s Senior Policy & Campaigns Manager, to find out why food waste was sidelined and what needs to happen next.

Let’s start by talking about the link between food waste and climate change. Why is tackling food waste so important?

Food waste causes emissions on a huge scale – about 8-10% of the world's emissions are caused by food waste. This is partly due to waste degrading in landfills and releasing methane, but even more important are all the emissions that are embedded in the lifecycle of producing and transporting that food – particularly meat, which causes a disproportionate amount of emissions.

Just as important as emissions is land use. Around half the world’s habitable land is used for agriculture, and the land that's used to grow food that's never eaten is equivalent to the size of China and India combined. It’s quite astounding. That's a huge amount of land that could be used for nature restoration, tree planting, and sequestering carbon – as well as feed the world sustainably through agro-ecological food production that might need a bit more land.

Despite this, food waste has been left off the agenda at COP26. Why are leaders holding back?

It’s down to a sort of blindness when it comes to the food system. I think the assumption is, ‘well, we need to eat, we can't change that’ – which means the food system is being left out of the conversation more broadly. For example, the recent UN report on methane shows that it’s a really potent greenhouse gas that could help us dramatically reduce emissions in the short term – and one of the main emitters of methane is agriculture, particularly animal agriculture. But all the measures being implemented to reduce methane are focused on other areas, like leakage from fossil fuel infrastructure.

Agriculture and the food sector cause anything up to about 30% of global emissions, so this isn't an optional bolt on that we can leave out. If we leave emissions from foods untouched, we're going to exceed safe limits of global warming.

What should have been included at COP26 – what are the actions that governments should be taking on food waste?

Historically, campaigns have focused on consumer education to reduce food waste. This is important, but doesn’t get to the root of the problem. These campaigns place excessive focus on consumers changing their behaviour, putting blame on people as individuals. In fact, about as much food is wasted (if not more) in the supply chain, before it reaches the consumer.

We've also already had the Courtauld Agreement, which involves businesses making voluntary commitments to reduce their food waste. But these voluntary commitments are just not cutting it: we're seeing reductions of about 1% per year. And we’re seeing that businesses just aren’t publishing their figures. Governments now need to skip straight to the step where food waste reporting is mandatory for businesses over a certain size. We’re calling on the government to urgently deliver this.

Part of the reason for food waste is that corporate actors in the supply chain have disproportionate power, particularly supermarkets. They are very skilled at pushing food waste on to both their suppliers and their customers – for example, retailers can reject food for being the wrong size or shape, or punish their suppliers if they ever under supply (so farmers feel they need to overplant by, say 10%, just to make sure that they never get delisted). So to get to the root of this problem, supermarkets need to internalise these risks and costs of food waste – which we can achieve by strengthening unfair trading practices legislation to cover indirect suppliers, and also extended producer responsibility. We've also been talking about the idea of introducing a levy on supermarkets proportional to how much food is wasted by their suppliers.

We also need to see updated regulation on best before dates, and make sure that supermarkets don't incentivise overbuying – for example, they should offer a variety of portion sizes not just big bags. We need to start seeing consumer food waste not as an individual personality failing, but pay attention to the environments influencing consumers’ decision making and try to design food waste out.

We want to see these kinds of policy interventions on the menu for all countries around the world – because tackling food waste is hugely important.

Thinking beyond COP26 – where should action happen to build the momentum needed to tackle food waste?

A great way of reducing food waste is actually shifting to systems that aren't dominated by supermarket’s control – so farmers selling directly to consumers, like veg box schemes. It means farmers can explain, ‘look, we've grown a bit more of this this year’, or ‘our carrots are a bit wonky this season’. It helps to educate consumers about these issues.

Overall, there’s a mindset shift that needs to happen, from voluntary commitments and consumer education to regulation. We need a complete overhaul of the food system to design overproduction out of the system, and that requires regulation and market intervention. The main impetus for that is definitely not going to come from large corporate businesses, it's going to have to come from citizens. Instead of people thinking, ‘what can I do to stop food waste? I'll change my behaviour here and there,’ they need to think of themselves as political citizens pressuring their governments to take action at a bigger level. Building the citizen-led movements needed to win that change is probably the most important thing. Of course, if you can reduce your own food waste as well, that's brilliant.

What are your hopes for the next five years when it comes to seeing action on food waste, and climate more generally?

Our dream situation is that the UK brings in mandatory food waste reporting and reduction targets for major businesses within the next couple of years. It’s important that this is done in a fair way, that avoids punishing farmers for food waste on their farm that is caused by factors in other stages of the supply chain.

Globally, there is a massive problem with the lack of data on food waste on farms – not a single country has a national level baseline for how much food is wasted on their farms. A recent WWF report has found that the best available data on on-farm food waste shows that an area the size of India is potentially lost just for the food waste on farms, and that around 4% of global emissions are caused by food waste on farms. This lack of data is a gaping black hole and also means that farms are locked out of all voluntary commitments, like the Courtauld Commitment in the UK. So this is something that urgently needs fixing.

The other thing I'd really like to see is the UN really taking leadership on target setting. Currently the SDG is phrased as a 50% reduction in consumer and retail waste, and a kind of vague reduction of food loss in farms and manufacturing. What we really need from the UN is a clear call for a 50% reduction of food waste from farm to fork, not just at retail and consumer level – because apart from anything else, it's an unfair focus on consumers, and it lets businesses evade responsibility.

We’re really excited to see that the EU is currently consulting on the introduction of legally binding food waste reduction targets for EU member states – the battle is now on for whether this target is to halve EU food waste from farm to fork, or whether a less ambitious target will be set narrowly focused on retail and consumer food waste.

These are huge challenges, and big changes are needed. Where do you find hope, as we look ahead?

There's a lot of hope to be found in activist movements – in seeing the resilience and enthusiasm of citizen-led grassroots movements who are pushing for this change. The change isn't going to come from anywhere else. It’s really inspirational to see those movements in action.

To get involved and help pile on the pressure for ambitious food waste regulations in the UK, Europe and around the world, sign up to Feedback’s mailing list here and keep an eye out for updates.