Are there dead wasps in figs? How figs are grown

Figs may make a spectacular addition to all sorts of dishes and desserts - but how much do you know about how they grow? 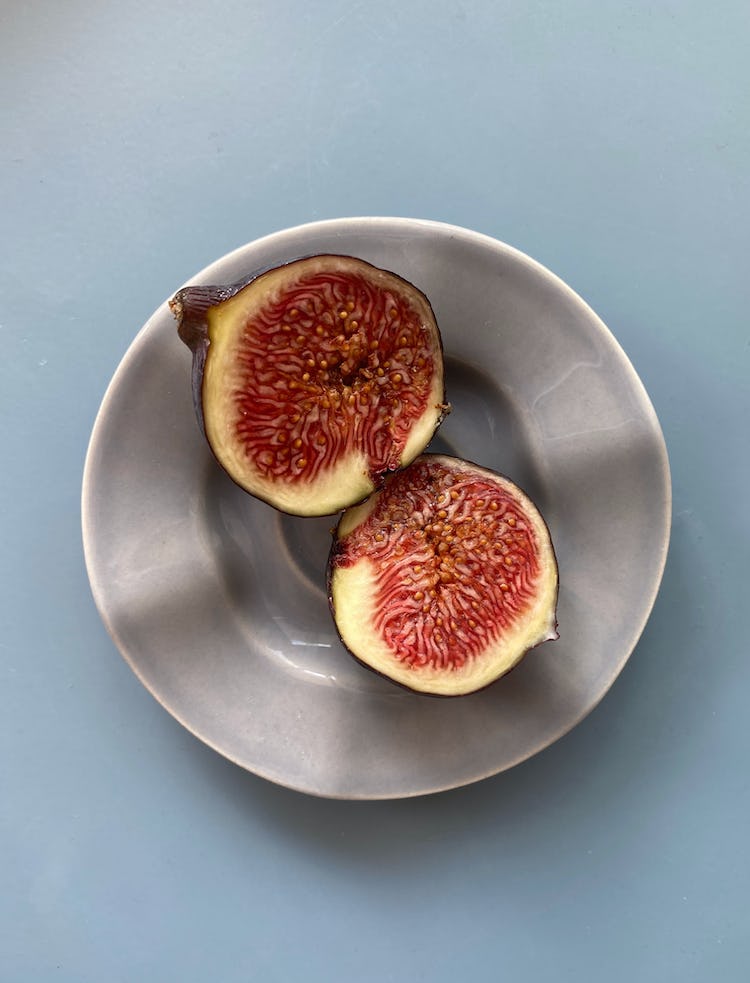 It’s a well-known fact that most fruit grows on trees, flourishes on vines or sprouts from leafy tendrils out of the ground. Fragrant figs fall firmly into the first category. Nevertheless, their pollination process is incredibly unusual, to say the least. In fact, many people believe this sweet and sticky fruit may not even be vegan…

Intrigued? Here we delve into the dynamics of growing this fantastic fruit and why a particular type of insect plays a huge role in its natural reproduction.

How are figs grown?

Figs are grown on trees, usually in balmier climes. You’ll no doubt spot these fantastic fig trees thriving in various Mediterranean and Asian countries. Unlike most fruits, figs hide their flowers (the producers of pollen) right in the middle of their fruit.

This, understandably, makes pollinating figs a little trickier than your average fruit. Instead of the pollen simply brushing off its blooms in the wind and floating away in the air, it has to be done in another - much more crafty - way.

How are figs pollinated?

When it comes to fig pollination, this is done with a little help from some buzzy friends. Yep, we’re talking wasps.

Why wasps, you might ask? These irritating insects that are the plague of so many summer picnics are essential for the pollination process of some figs. Not just any wasps, though. There are special fig wasps that have evolved to simultaneously pollinate figs AND use the fruit as vessels to lay and hatch their eggs in.

To do this, a female wasp will:

And if the fig the female wasp crawls into is also female? The wasp pollinates the flower so the fruit ripens, but cannot lay any eggs inside.

Unfortunately, as the gap the original wasps crawled through to reach the fig flowers is really tiny, they usually lose their wings in the process. This, sadly, makes it a one way trip for the fig wasp.

Are there dead wasps in figs?

Before you go thinking that those crunchy seeds in figs are in fact bits of dead wasp, let us set you straight. There are no dead wasps in figs. Just seeds - nothing more.

What does happen to that wingless wasp, we hear you ask? Thanks to an enzyme (known as ficin) that’s present in figs, the dead wasps are simply broken down and absorbed back into the fruit.

Remember, not all figs have wasps in them. Some varieties - including many grown for the supermarkets - don’t need to be pollinated by fig wasps. Instead, they’re sprayed with certain hormones to make the fruit ripen or they’re simply a type of fig that doesn’t need pollination.

Despite their rather unique growing process, figs are vegan. This is widely accepted by a number of vegan organisations who have concluded that because the wasps have already been absorbed by the fruit by the time they’re harvested, you’re not actually eating a living creature.

What’s more, the pollination process happens with no human intervention - it’s simply nature taking its course. Like many plant-based items - from wine to sugar -  though, it is possible for some fig products to not be vegan. For example, figs are often used to sweeten biscuits and cakes or even as an ingredient in jelly.

Speaking of fig-flavoured treats, why not check out our recipe for fig and almond cake? Our recipes section also has heaps more delicious options for the fruit and veg in your box.