7 fruits/veggies to look forward to this Autumn, and what to do with them

The seasons are shifting into Autumn, which means we'll be seeing different fruits and veggies in our boxes.

Here are some of the Autumnal veggies and fruits you're likely to see in your box in the coming weeks and months. This isn't a full list, and as we're grower-led at Oddbox we may see these veggies at different times (or sometimes not at all!). 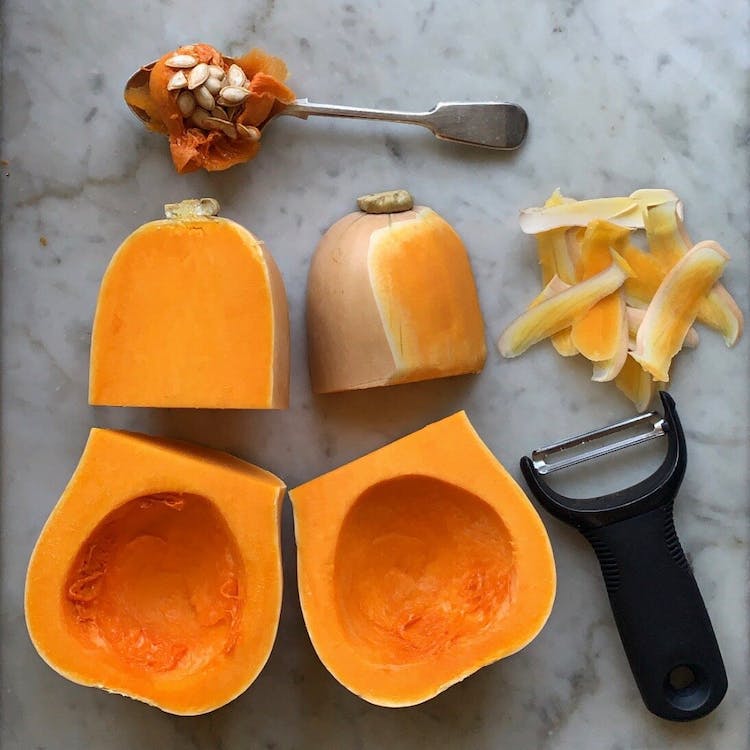 Beetroot is usually both slightly earthy and sweet - and there's no other Autumn veggie that tastes like it. Wash and trim the stems off the root, leaving around 1 inch still attached so it doesn't 'bleed' when cooked. Save the stems and leaves - they add sweetness to salads and blend well into homemade pesto. Cover with cold water in a pan, bring to a boil and simmer for 30 mins until the beetroot is tender. Drain and leave to cool, then rub off the skins with your fingers. You can pickle beetroot with various ingredients and put it in a jar to prolong its life. Chop it into salads with walnuts and vegan feta cheese. Add chunks to a risotto towards the end of its cooking time. Or blend beetroot into homemade hummus.

Apples can be tart, sweet, or anywhere in between. Remove their seeds and stem before using – but there's no need to peel the skin off. You can eat most varieties raw, although cooking apples often only taste good when cooked and added to desserts. Use apples in bakes, tarts, strudels, pies, cobblers and crumbles. They form a great base for smoothies and juices too, as they mix well with pretty much every other fruit and add sweetness to predominantly veggie juices. Add apples to a salad with walnuts for a crunch.

The juicy, sweet flesh of pears can be granular or smooth, depending on the variety. And although they taste great eaten raw, you can cook pears into sweet or savoury dishes too. To prep pears, cut them into quarters, then remove the seeds and stem. They pair well in dishes with chocolate, ginger or strong cheeses (including vegan varieties). Cook pears into tarts or other cakes to add moistness and texture. They can also be softened over the stove and added to a salad, or blended as part of a salad dressing.

Often stereotyped as only a super-healthy food, kale deserves recognition for how delicious it is too. If you have whole kale leaves, keep them raw in a small glass of water in the fridge to help them last for longer. Don’t wash them until you’re ready to use them. You can eat kale raw or cooked – it's simply crunchier, with a bolder flavour, when raw. Slice the leaves along both sides of the stem. Then save the stems - they taste the same as the leaves, they just take longer to cook. Blanch, stir fry or steam. Slice them into ribbons and throw them into a quinoa salad to add depth of flavour.

Aubergine has a unique fleshy and spongy texture. When cooked right, it soaks up the flavours of other ingredients. Store raw aubergine in a cool, dark cupboard instead of the fridge. Simply trim the stems off aubergine to prepare them. Slice them across into rounds, or lengthways into quarters. Then grill until slightly charred, fry or bake in the oven drizzled with oil. Stuff aubergines by slicing lengthways in half and scoop out the insides to mix with other ingredients, then cook in the oven. Add lemon or pesto, then dust with polenta or breadcrumbs for added texture.

Besides butternut squash, these classic Autumn vegetables come in all shapes and sizes. Hard-skinned squashes will keep for two months in a cool, dark cupboard. When cutting a squash, use a large, sharp knife. Trim off the stem and a tiny amount of the other end. Cut it in half through the middle, then peel off the skin with a peeler or knife. Slice the squash lengthways and scoop out the seeds. They can be fried or roasted to top salads or soups. Cut your squash into cubes or slices - the smaller the pieces, the faster they will cook. Boil them until you can easily pierce with a fork. Add squash to a risotto with rosemary. Fry thin slices in oil and herbs and add to a roast dinner. Mash it after cooking and mix it with vegan butter for a comforting, creamy potato alternative.

Leeks are known as a milder onion variety, but they still lend plenty of flavour to dishes. Cut off the root at the bottom and discard the tougher, darker green leaves at the top. Slice the leek lengthways, then into half-moons. Cook the pieces in oil on low heat over the stove, or caramelize them, to release their flavour. Turn the heat up if you’d like to slightly crisp the slices. Leeks fried with oil or sauteed are great, and they shine when used in a stir fry or any noodle dish. Roast leeks in the oven with other veggies. Or add to pies, tarts or pasties for added zing.