10 ways you can use green tomatoes

What are green tomatoes? Are they just unripe tomatoes or something completely different? And are there green tomato recipes you can follow? 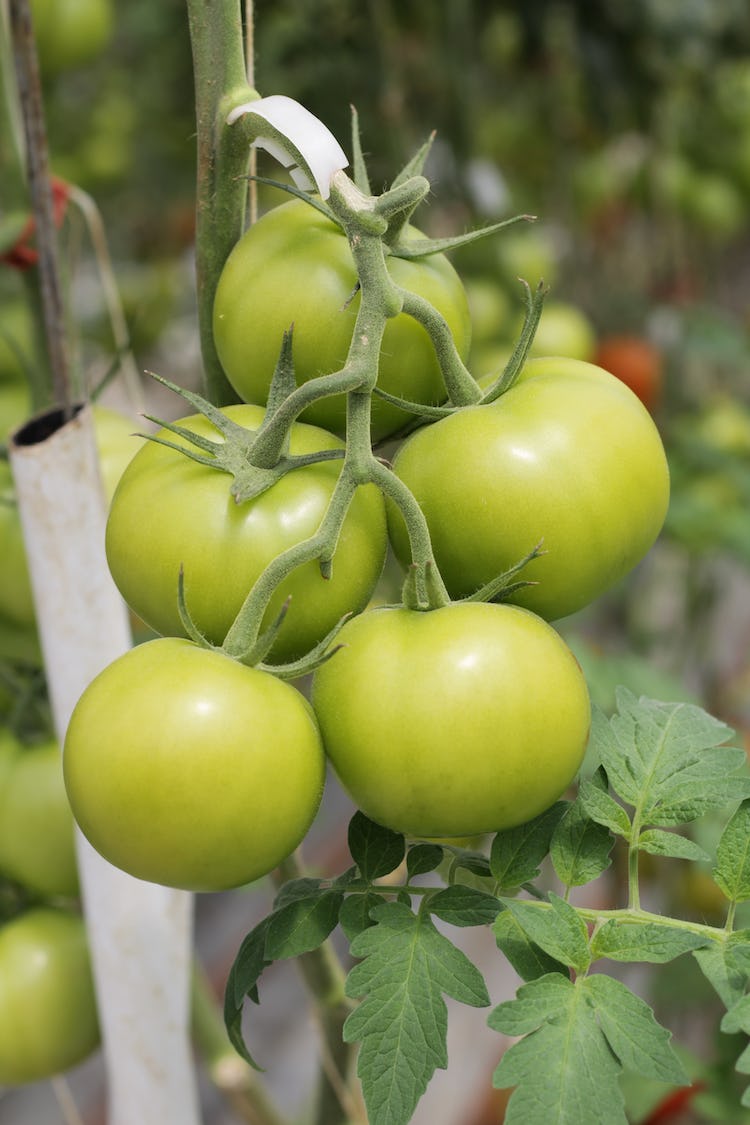 Firstly, there are two types of green tomatoes. Sometimes, they’re a separate variety of heirloom tomato that are still green when ripe. This type often has vertical stripes or other colouring variations, and they’re soft when pressed. Heirloom green tomatoes taste like a typical red tomato.

An unripe tomato is pale green all over, has an almost crunchy bite and tastes tart. We love them so we’ve shared some of our fave unripe tomato recipes below.

Is it safe to eat green tomatoes?

Whether cooking with green tomatoes or eating them raw, they’re safe to consume. Just test the waters first if you’re particularly sensitive to acidic foods, as green tomatoes can cause gastrointestinal discomfort for a small number of people.

It’s possible to ripen your unripe tomatoes by leaving them somewhere warm, packed in with apples or ripe bananas in a paper bag. But this plan won’t always work, leaving green tomatoes the same colour as they started.

Besides, you can find red tomatoes any time. Why not try some recipes with green tomatoes instead, enjoying their firm texture and more acidic taste?

Here are just some ideas of what to do with green tomatoes:

Keep reading for more details on these unripe tomato recipes.

Slice 1kg of green tomatoes and finely chop 200g onions. Layer both in a large bowl with 1 tbsp of salt and leave overnight.

The next day, chop 200g sultanas then core and chop 200g cooking apples.

Pour 200g sugar (muscovado is preferable, but use any) and 500ml vinegar into a large pan, stir to dissolve the sugar and bring to the boil. Add the sultanas and apples, then simmer for 10 minutes. Strain the tomatoes and onions in a colander (don’t rinse them) then add them to the pan and return to the boil.

Simmer and stir occasionally for about 1 hour, until the mixture is thick and pulp-like.

Transfer into sterilised, warmed jars and cover with lids.

Cut 4 large or 6 medium green tomatoes crosswise into 1 cm slices, then season with salt and pepper.

Mix 130g polenta or breadcrumbs in a bowl with ½ tsp smoked paprika.

Lightly beat 2 eggs (or, to make it vegan, whisk 6 tbsp of aquafaba) in a separate bowl.

Heat 120ml vegetable oil in a frying pan over medium heat. Dip the tomato slices in the egg or aquafaba mixture, then roll them in the polenta bowl. Fry them in a single layer for around 3 minutes per side, or until they’re golden brown.

Drain on a plate lined with a paper towel.

Weigh a 1l sealable jar (or one with a lid) and make a note of the number on the scales. Dice 375g green tomatoes, then pack them into the jar.

Gather 10g sliced garlic cloves, 30g sugar (preferably caster but any will do), 250g white wine vinegar (or use any), 250ml water, 1 bay leaf, ½ tsp black peppercorns, ¼ tsp yellow mustard seeds, ¼ tsp coriander seeds and 1 pinch of chilli flakes. Place these other ingredients in a large saucepan and bring to the boil. Allow them to cool, then pour over the tomatoes in the jar.

Weigh the jar again and subtract the original weight of the jar itself. Then divide the number by 100% to work out 1% of the mixture’s weight. Add this amount of salt into the jar.

Seal and leave at room temperature for 1 week. Make sure the tomatoes stay submerged throughout the pickling time.

Once opened, store in the fridge for up to 3 months.

Melt 2 tbsp vegan spread or butter in a pan. Add 2 tbsp minced onion and cook until the onions become translucent.

Whisk 2 eggs, or 6 tbsp of aquafaba for a vegan alternative, in a small bowl. Pour in 85g of dairy or plant milk.

In a third small bowl, pour either 80g of polenta and 80g breadcrumbs, or 160g breadcrumbs. Then add 1 tbsp Italian seasoning, plus 2 tbsp of grated parmesan or your favourite sharp vegan cheese.

Dredge the tomato slices into the egg bowl, then coat both sides in the flour, finishing with the polenta mix.

Single layer them into the basket of an air fryer, then spray the tops with olive oil. Cook at 200°C in the air fryer for 5 or 6 minutes, then flip over, spritz with olive oil again and cook for another 5 minutes.

(via The Recipe Critic)

Spread in a single layer on a baking sheet. Slot on the middle rack of the oven and bake for 45 minutes to 1 hour. The tomatoes should be deflated but still juicy.

(via The Daily Dish)

Cook 1 kg beans of your choice and put them to one side. Dice 3 large green tomatoes, 2 chilli peppers (jalapeños work great), 1 onion and 2 stalks of celery.

Place all the vegetables in a large skillet, along with 1 tbsp olive oil and the juice of 2 limes. Sauté over medium heat until they’re all soft. Add 1 tsp turmeric, 1 tbsp chilli powder and 1 tbsp cumin and simmer for another 2 mins. Mix in the beans and heat through.

For a salad with a Burmese twist, in a small saucepan, combine 1 tbsp peanut oil, 1 chilli pepper and ¼ tsp dried chilli flakes. Place over medium heat and warm for 1 minute, then remove and let it cool.

Add more lime juice and salt it to taste. Coarsely chop a good handful of fresh coriander and garnish to serve.

Add the ingredients into a stockpot, along with 1 tsp salt, ¼ tsp ground cumin, 1 tbsp olive oil and 3 tbsp water. Bring to the boil then cover, cooking on a medium-low heat for 10 minutes and stirring occasionally. Stir in ½ tsp fresh lemon zest, 1 tbsp fresh lemon juice, 1 tsp sugar and a small handful of chopped coriander leaves. Simmer for another 5 minutes. Taste the mixture and adjust the flavours if needed.

Whiz the mixture in a blender, pulsing until the salsa is the consistency you prefer – whether that’s chunky or smooth.

What can you do with green tomatoes when you have too many? Take the pressure off and freeze them to use later.

While you can pop tomatoes in the freezer, you should be aware their texture will become much less firm once you thaw them out again. This is no problem if you’re planning a green tomatoes recipe where you fry them up or bake them in the oven. Just wave goodbye to any dreams of adding them, raw, into a salad – they’ll be too mushy.

To freeze green tomatoes, first chop them into ½ cm slices. Then separate them into portion sizes with wax paper and put them into an airtight container with minimal excess air inside. Place them in the freezer for up to 12 months.